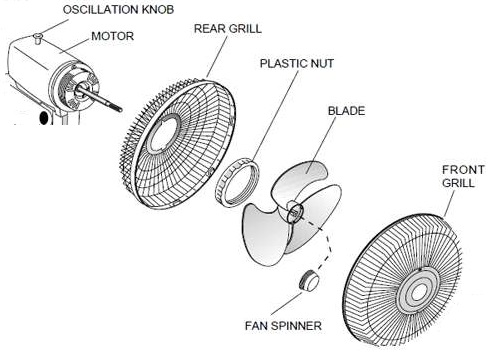 Now that the temperatures are low, you have probably already put away the fans you had been using over the summer. Before you use your fans next summer, here is a fairly easy way to remove dust from the fan blade and fan blade cover.

NOTE
This procedure covers most household fans. Your fan could be assembled using different parts.

Designate a location for keeping all the parts in one place during disassembly.

WARNING
When removing the plug from a wall outlet ALWAYS pull on the plug, NEVER the cord. Pulling on the cord could cause it to separate from the plug, leaving potentially dangerous wires exposed in your hand.

Always disconnect electricity from any appliance before working on it. Failure to do so could cause injury or death.

NOTE
Most fan spinners are assembled with left-hand threads due to the direction that the blade spins during operation.

CAUTION
NEVER let water come in contact with any electrical part of the fan or motor. Doing so could ruin the fan.

NOTE
Cleaning may be performed in a kitchen sink (if the blade and screens are small enough to be immersed), or a bathtub (if these parts are too big for the sink).

Caution
All parts must be thoroughly dry before reassembly begins. If any part is damp, it could cause a mold buildup.

NOTE
A barstool works perfect for covering the fan in a plastic bag. Just be sure not to get any oil/grease from the underside of a swivel barstool on the bag.